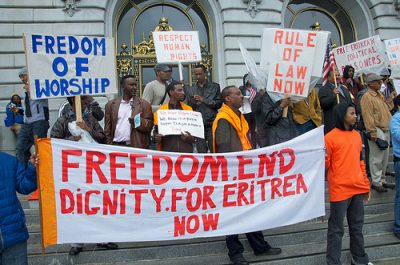 Conflicting reports have sprung up about a supposedly violent riot in the Eritrean capital of Asmara that allegedly took place late last week.

All that’s known for certain is that a crowd gathered to unsuccessfully protest the closing down of an Islamist school over the weekend that had long flouted the government’s orders to secularize some of its rules and curricula, though what came next is in dispute. The opposition said that soldiers opened fire and killed 28 people while wounding approximately 100 more, though the state says that nothing of the sort took place and that the low-intensity protest was peacefully disbanded. Unverified YouTube footage has since emerged showing a riotous crowd with the sound of gunfire in the background, but it’s uncertain if this was from last weekend’s event and whether the gunfire was directed against civilians, or even if actual rounds were used and not blanks or rubber bullets. In any case, this story soon reached the international media and quickly made rounds on the major outlets, with the implied message being that the “dictatorial regime” of President Isaias Afwerki was killing “peaceful protesters” just for the fun of it.

This narrative is a common one because the secretive and national security-focused state is oftentimes maligned by the Mainstream Media in being labelled the “North Korea of Africa”, and this is because the President has remained in office since the country’s 1993 independence from Ethiopia and the military holds enormous power. The reason for the security forces’ influential role in society is because

Eritrea remains at tense odds with Ethiopia, and their unresolved border dispute could lead to a repeat of the mutually disastrous 1998-2000 war at any moment. Both sides support armed opposition groups against one another, which the respective target government describes as terrorists while labeling their own proxies as freedom fighters. Ethiopia feels uneasy with Eritrea’s independence because Addis Ababa fears that it set a precedent for other regions of the ultra-diverse country to secede as well, while Eritrea for that very same reason implicitly believes that it can only retain its independence if Ethiopia remains weakened and divided.

To return back to last weekend’s scandalous event, the negative international attention drawn to Eritrea will make it more difficult for Asmara to successfully lobby for the lifting of UNSC sanctions against it, which were originally imposed in 2009 because of its suspected ties to the Al Shabaab terrorist group in Somalia. Since then, Eritrea has cautiously crawled out of relative “isolation” by silently joining the Saudi-led War on Yemen in providing bases – and some reports allege, even troops – to the pro-Hadi coalition, but just like the government in neighboring Sudan, Asmara needs American support in order to feel entirely secure, at least for the time being. Now, however, Eritrea saw the power that religious opposition to the authorities can have in this almost evenly divided Christian-Muslim country, and it must tread carefully to avoid the weaponized perception that the secular government is “violating Muslims’ rights” otherwise it might soon fall victim to the same jihadist forces that it’s accused of supporting abroad.

The post presented is the partial transcript of the CONTEXT COUNTDOWN radio program on Sputnik News, aired on Friday Nov 10, 2017:

Andrew Korybko is an American Moscow-based political analyst specializing in the relationship between the US strategy in Afro-Eurasia, China’s One Belt One Road global vision of New Silk Road connectivity, and Hybrid Warfare.

Featured image is from Assenna.com.

The original source of this article is Oriental Review

Become a Member of Global Research