Our leaders are criminals who should be punished! The Lies They Told Murdered Millions!

Demagogues who claim they are above the law are beneath contempt 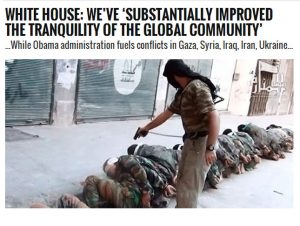 When criminals have the power of government on their side, there is no stopping them. History shows the only way of altering these familiar reigns of terror is stealing the government back from them by any means necessary.

No matter how much blood may be spilled, it will be far less than simply letting the tyrants have their way.

But rousing the public to action does not seem like a viable course, judging by the traditional level of apathy and pathological attention to meaningless trivia that afflicts most citizens of this decaying republic.

We are good little slaves. One by one we keep falling asleep and forgetting what has happened as recently as yesterday, how we ignored one atrocity after another until eventually the random reaper comes round to us, when we cry out our last lie. “I didn’t know!” we scream, when in actuality we did, but ignored our wishful thinking impulse to do something about it.

The general run of humans would rather have everything done for them and luxuriate in leisurely splendor than build their own lives and take pride in their modest accomplishments. This way lies totalitarianism. It is how the modern mind, lured off kilter by its addictions and compulsions, has slid into totalitarianism without really noticing.

Today the government says anything it wants without regard to the simple facts right before our eyes.

It is universally acknowledged that the war in Iraq was a fraud. Based on lies. It was about stealing Iraq’s oil and keeping all of Israel’s neighbors in a state of chaotic disarray.

Therefore, all the actions which have taken place during the 27-year-long decimation of that country were not acts of war. They were crimes. Premeditated crimes. Capital crimes. And the people — no, the psychopaths! — who committed these criminal acts of war must be held accountable for them, or there is no genuine rule of law anywhere in the world.

It is well past time to dematerialize the cynical media shield that has protected these evil men from prosecution by perpetrating the lie that they were acting in the best interests of the country when in fact they were not.

They were acting in the best interests of the men who were bribing these feckless gophers to do their bidding. Which means it was about the oilthey’re not one and the same).

Pinning blame for 9/11 on Arab outlaws living in remote mountain caves gave the big boys an excuse to go in and take control of poppy production, which, when refined into heroin, is distributed all over the world by our CIA both to keep the populations sedated and the moneymaking prisons full.

Those who run the government and the banks can commit any crime they like because they appointed all those judges. The rest of us can be found guilty without ever committing a crime if we stand in the way of the wheels of exploitation, as the Hammonds of Oregon did by owning land that contained uranium ore, which Hillary Clinton finally succeeded in selling to the Russians, with a really big commission to the Clinton Foundation. (Not much media coverage of this.)

Needless to say, in a country with real laws and genuine judges, all of these people who haven’t already been executed should have started serving long prison sentences years ago.

The same goes for those who murdered the wedding party in Afghanistan, or tortured prisoners at Guantanamo or in Abu Ghraib prison, since the reasons for this war were lies (that Osama bin Laden masterminded the 9/11 caper and was hiding in caves at Tora Bora). Had any one of Hitler’s soldiers done any of this he would have been executed.

Along with the child rape/blackmail scandal now slowly emerging, these two taboo subjects seldom if ever rate a headline in the newspapers used to keep you asleep, yet are damning elements in our attempt to have some kind of authentic responsibility represented in our government.

Right now all government employees — and every cop, lawyer and judge in America — are complicit in capital crimes for going along with the lame stories our government uses to kill people, especially its own loyal employees like Pat Tillman, John Wheeler, Seth Rich and other courageous whistleblowers.

The criminal masterminds who are responsible for 2 million murders in Iraq, 600,000 in Libya, a half million in Syria, and many thousands more in Serbia, Pakistan, and any other country who tries to impede the objectives of Big Oil, Big Pharma and other Monsanto-like parasites out to kill off most of the population, need to be punished for their deeds.

Since the entire law enforcement apparatus is controlled by Jews, it is awfully difficult to point out the true culprits in all these wars and terror incidents. In fact, pointing out their crimes is likely to land you in jail, if not completely liquidated.

It’s impossible to have a good government when it is being run by criminals, and worse than that, by criminals who are not Americans, yet control America.

Typically, down through history, the people who commit crimes like this and take over countries by their perfidy (example: Nathan Rothschild taking control of England’s finances after the Battle of Waterloo) are never apprehended, because once you gain control of a nation’s media apparatus you can pretty much commit any crime you want and get away with it.

This is the story of at least the last five American presidents, who all got very rich from executing the policies of the very rich against the very poor, and lying about just about everything they did.

This is really the whole story of American history.

Down through the history of the past 400 years, the ursurpers and the assassins have always been Jews, successfully robbing countries while defaming and murdering true patriots trying in vain to save their homelands.

When Jews get control of a society they kill off the non-Jew opposition, save for those they can utilize as slaves. The No. 1 object lesson is perhaps the old Soviet Union, a hellhole deathtrap in which Aleksandr Solzhenitsyn estimated 66 million non Jews were murdered in the USSR between 1917 and 1953. Murdered by Jews.

I always wondered about why America backed the Soviet Union instead of Germany in World War II, but that was before I learned that the United States is totally controlled by Jews, on all levels. This is something Hitler never learned, apparently.

The Jews’ special emphasis is on white Christians, whom they seek to make extinct so as to replace them as the alpha dog of the human species.

The war against Syria has cost the lives of at least 300,000 Syrians. It was planned by the United States and its NATO partners and financed by the Gulf Monarchies.

If we’re supposed to be the No. 1 enlightened beings on the planet, why are we going around robbing and killing each other (which incidentally is the main plank of the Jewish philosophy, along with betrayal, causing diseases, penile mutilations and beheadings)?

How much of America’s criminal behavior throughout the world (creating one’s own enemies to kill one’s own people is the worst crimes of all) is due to Jewish influence, and how much derives from the basically savage nature of our country’s original inhabitants?

But humanitarian acts will not happen with this government, because each member of it is motivated by profit which necessitates the lies they constantly tell.

We make airplanes disappear from the sky — frequently — when one of the passengers has information revealing crimes of the power elite.

The great leaders of history have always been the greatest killers. In modern times, these so-called great leaders like Churchill and Roosevelt, or George Bush and Barack Obama, have added an extra wrinkle to the hero formula. Their exploits are totally based on lies that are fed to and believed by a gullible public.

Maybe it has always been that way. Maybe every era is about the rich strafing the poor, who eternally clamor in vain for justice. Maybe this is the permanent human condition.

The closest we can get to truth is faith. Often this attempt may be misplaced. Then the thing we worship is exactly what destroys us.

Yet without the truth of faith we are consigned to a hopeless oblivion. Happiness and contentment do not lie that way.

But unless we at least try to do that, we have no hope of ever being truly accountable to our own consciences, no matter what lame excuses we trot out to justify our own self-serving behavior.

Without adequately reconnoitering the damage we have done to ourselves and others by our reckless behavior, we have no hope whatsoever of charting and creating a truly healthy and realistic future.

The only reason to criticize anyone else is prevent a crime from occurring, or continuing to occur. This is what opposition to the Jews is all about. It’s not about hatred. It’s about the crimes the Jews constantly commit against the whole world — crimes of extortion, robbery and mass murder, the poisoning of the world through Monsanto, the stifling of our minds through moribund media, all turning us into compliant robots who have no clue about how we are being used and abused.

They must be held accountable, or the spark of humanity will be snuffed by the ultimately fatal chemical light of the Jews’ homicidal mania, these purveyors of perversion turning everything upside down and stealing everything from everyone, to the benefit of no one but themselves.

John Kaminski is a writer who lives on the Gulf Coast of Florida, constantly trying to figure out why we are destroying ourselves, and pinpointing a corrupt belief system as the engine of our demise. Solely dependent on contributions from readers, please support his work by mail: 6871 Willow Creek Circle #103, North Port FL 34287 USA.