The Islamic State (ISIS), the Pentagon’s “Caliphate Project” and the “Global War on Terrorism”

The Al Qaeda legend and the threat of the “Outside Enemy” is sustained through extensive media propaganda. In the post 9/11 era, the terrorist threat from Al Qaeda constitutes the building block of US-NATO military doctrine, which justifies the conduct of “counter-terrorism operations” Worldwide.

In the post 9/11 era, the terrorist threat from Al Qaeda constitutes the building block of US-NATO military doctrine. It justifies –under a humanitarian mandate– the conduct of “counter-terrorism operations” Worldwide.

Known and documented, Al Qaeda affiliated entities have been used by US-NATO in numerous conflicts as “intelligence assets” since the heyday of the Soviet-Afghan war. In Syria, the Al Nusrah and ISIS rebels are the foot-soldiers of the Western military alliance, which in turn oversees and controls the recruitment and training of paramilitary forces.

While the US State Department is accusing several countries of “harboring terrorists”, America is the Number One “State Sponsor of Terrorism”: The Islamic State of Iraq and al-Sham (ISIS) –which operates in both Syria and Iraq– is covertly supported and financed by the US and its allies including Turkey, Saudi Arabia and Qatar.

Moreover, the Islamic State of Iraq and al-Sham’s Sunni caliphate project coincides with a longstanding US agenda to carve up both Iraq and Syria into separate territories: A Sunni Islamist Caliphate, an Arab Shia Republic, a Republic of Kurdistan, among others.

The US-led Global War on Terrorism (GWOT) constitutes the cornerstone of US military doctrine. “Going after Islamic terrorists” is part and parcel of non-conventional warfare. The underlying objective is to justify the conduct of counter-terrorism operations Worldwide, which enables the US and its allies to intervene in the affairs of sovereign countries.

Many progressive writers, including alternative media, while focusing on recent developments in Iraq, fail to understand the logic behind the “Global War on Terrorism.” The Islamic State of Iraq and Al Cham (ISIS) is often considered as an “independent entity” rather than an instrument of the Western military alliance. Moreover, many committed anti-war activists –who oppose the tenets of  the US-NATO military agenda– will nonetheless endorse Washington’s counter-terrorism agenda directed against Al Qaeda:. The Worldwide terrorist threat is  considered to be “real”: “We are against the war, but we support the Global War on Terrorism”.

The Caliphate Project and The US National Intelligence Council Report

A new gush of propaganda has been set in motion. The leader of the now defunct Islamic State of Iraq and Al Cham (ISIS) Abu Bakr al-Baghdadi announced on June 29, 2014 the creation of an Islamic State:

Fighters loyal to the group’s proclaimed “Caliph Ibrahim ibn Awwad”, or Abu Bakr al-Baghdadi as he was known until Sunday’s July 1st announcement, are inspired by the Rashidun caliphate, which succeeded the Prophet Muhammad in the seventh century, and is revered by most Muslims.” (Daily Telegraph, June 30, 2014)

In a bitter irony, the caliphate project as an instrument of propaganda has been on the drawing board of US intelligence for more than ten years.  In December 2004, under the Bush Administration, the National Intelligence Council (NIC) predicted that in the year 2020 a New Caliphate extending from the Western Mediterranean to Central Asia and South East Asia would emerge, threatening Western democracy and Western values.

The “findings” of the National Intelligence Council were published in a 123 page unclassified report entitled “Mapping the Global Future”.

The NIC 2004 report borders on ridicule; it is devoid of intelligence, let alone historical and geopolitical analysis. Its fake narrative pertaining to the caliphate, nonetheless, bears a canny resemblance to the June 29, 2014 highly publicized PR announcement of the creation of the Caliphate by ISIS leader Abu Bakr al-Baghdadi.

The NIC report presents a so-called “fictional scenario of a letter from a fictional grandson of Bin Ladin to a family relative in 2020.”  It is on this basis that it makes predictions for the year 2020. Based on an invented bin Laden grandson letter narrative rather than on intelligence and empirical analysis, the US intelligence community concludes that the caliphate constitutes a real danger for the Western World and Western civilization.

From a propaganda standpoint, the objective underlying the Caliphate project –as described by the NIC– is to demonize Muslims with a view to justifying a military crusade:

“The fictional scenario portrayed below provides an example of how a global movement fueled by radical religious identity could emerge.

Under this scenario, a new Caliphate is proclaimed and manages to advance a powerful counter ideology that has widespread appeal.

It is depicted in the form of a hypothetical letter from a fictional grandson of Bin Ladin to a family relative in 2020.

He recounts the struggles of the Caliph in trying to wrest control from traditional regimes and the conflict and confusion which ensue both within the Muslim world and outside between Muslims and the United States, Europe, Russia and China. While the Caliph’s success in mobilizing support varies, places far outside the Muslim core in the Middle East—in Africa and Asia—are convulsed as a result of his appeals.

The scenario ends before the Caliph is able to establish both spiritual and temporal authority over a territory— which historically has been the case for previous Caliphates. At the end of the scenario, we identify lessons to be drawn.”(“Mapping the Global Future”.  p. 83) page 90 of the report

This “authoritative” NIC “Mapping the Global Future” report was not only presented to the White House, the Congress and the Pentagon, it was also dispatched to America’s allies. The “threat emanating from the Muslim World” referred to in the NIC report (including the section on the caliphate project) is firmly entrenched in US-NATO military doctrine.

The NIC document was intended to be read by top officials. Broadly speaking it was part of the “Top official” (TOPOFF) propaganda campaign which targets senior foreign policy and military decision-makers, not to mention scholars, researchers and NGO “activists”. The objective is to ensure that “top officials” continue to believe that Islamic terrorists are threatening the security of the Western World.

The underpinnings of the caliphate scenario is the “Clash of Civilizations”, which provides a justification in the eyes of public opinion for America to intervene Worldwide as part of a global counter- terrorism agenda.

From a geopolitical and geographic standpoint, the caliphate constitutes a broad area in which the US is seeking to extend its economic and strategic influence. In the words of Dick Cheney pertaining to the 2004 NIC’s report:

“They talk about wanting to re-establish what you could refer to as the Seventh Century Caliphate. This was the world as it was organized 1,200, 1,300 years, in effect, when Islam or Islamic people controlled everything from Portugal and Spain in the West;all through the Mediterranean to North Africa; all of North Africa; the Middle East; up into the Balkans; the Central Asian republics; the southern tip of Russia; a good swath of India; and on around to modern day Indonesia. In one sense from Bali and Jakarta on one end, to Madrid on the other.” Dick Cheney (emphasis added) 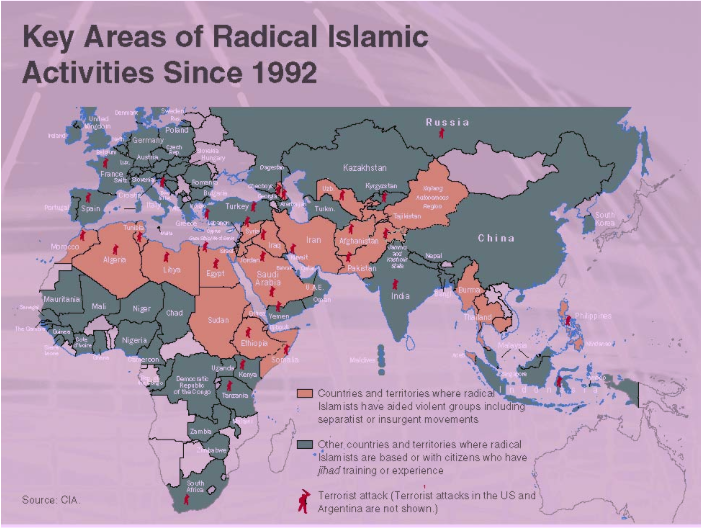 What Cheney was describing in today’s context is a broad strategic region extending from the Mediterranean to Central Asia and South East Asia in which the US and its allies are directly involved in a variety of military and intelligence operations, including covert US support to ISIS and Al Qaeda affiliated entities in the so-called “countries and territories where radical Islamists have aided violent groups…” (see map above)

The stated aim of the NIC report was “to prepare the next Bush administration for challenges that lie ahead by projecting current trends that may pose a threat to US interests”.

The document refers to the appeal of the caliphate to Muslims and concludes that:

“the proclamation of the Caliphate would not lessen the likelihood of terrorism and in fomenting more conflict”. [sic] The NIC’s analysis suggests that the proclamation of a caliphate will generate a new wave of terrorism emanating from Muslim countries thereby justifying an escalation in America’s Global War on Terrorism (GWOT):

the proclamation of the caliphate … could fuel a new generation of terrorists intent on attacking those opposed to the caliphate, whether inside or outside the Muslim World.” (emphasis added)

What the NIC report fails to mention is that US intelligence in liaison with Britain’s MI6 and Israel’s Mossad are covertly involved in supporting both the terrorists and the caliphate project.

In turn, the media has embarked on a new wave of lies and fabrications, focusing on “a new terrorist threat” emanating not only from the Muslim World, but from “home grown Islamist terrorists” in Europe and North America.

This article was first published by Global Research in July 2014