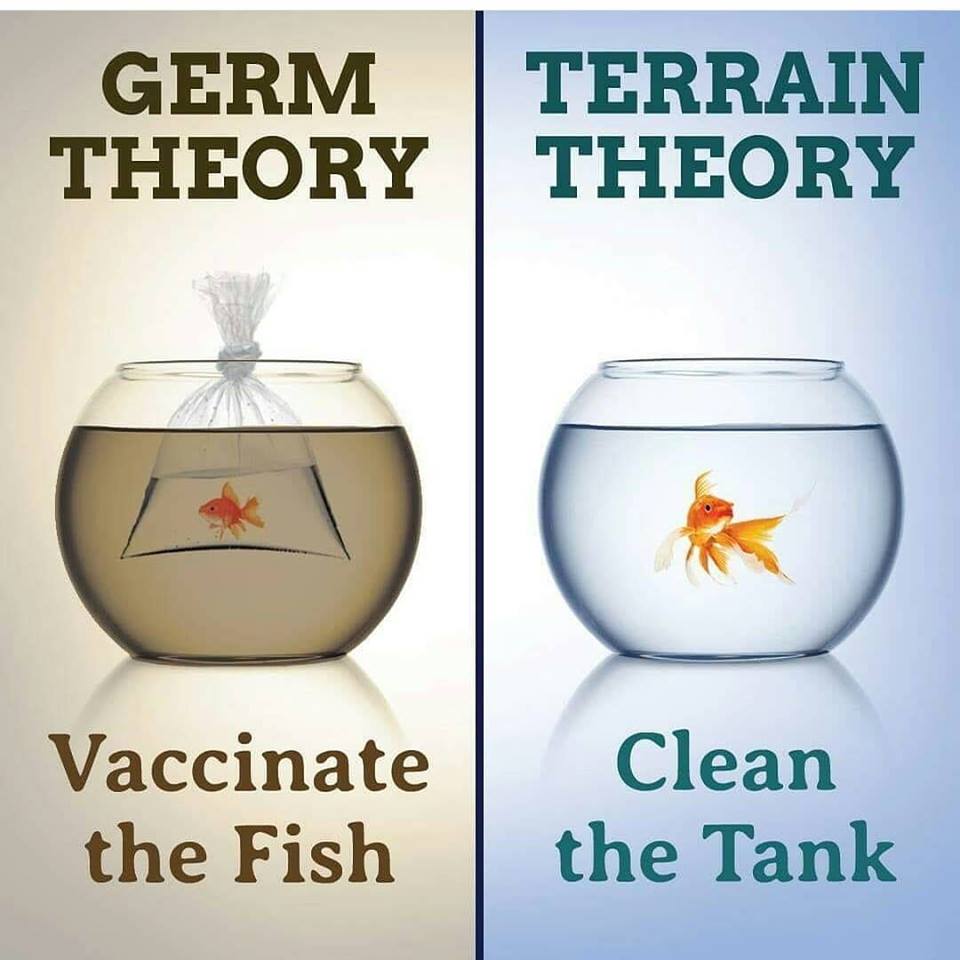 “Germ Theory does not account for or explain many diseases, such as cancer, heart disease, diabetes… There is clearly a gap in the conventional wisdom of how our bodies work and why we become ill….illness is the body’s way of ridding itself of toxins and is the result of a weakened immune system.”

“It is said that not a single virus has been proven to exist, and that in order for a virus to be correctly identified, it has to be isolated, reproduced, and shown that symptoms develop in line with expectation (known as the Koch’s Postulates test). This has reportedly never taken place.”

BY LOUIZE SMALL
(abridged by henrymakow.com)

Modern Western medicine is based on Germ Theory. We have accepted it into our narrative in the same way we have embraced taxes and war. It just is.

Germ Theory posits that we become ill when infected by micro-organisms in our external environment. It makes sense; there is a whole industry built upon it. On further investigation, we find that Germ Theory was debunked in 1918 when the Boston Health Department failed to infect 300 healthy patients with the Spanish Flu; they could not intentionally replicate the virus.

It is said that not a single virus has been proven to exist, and that in order for a virus to be correctly identified, it has to be isolated, reproduced, and shown that symptoms develop in line with expectation (known as the Koch’s Postulates test). This has reportedly never taken place.

In 2017, German microbiologist Dr Stefan Lanka offered €100,000 to anyone who could prove the existence of the measles virus. There was an initial claim but it was overturned by the Supreme Court due to the composite nature of the evidence – meaning it was a faked image, made from different components of damaged cells.

You’d think medical students and rookie scientists would be falling over themselves to claim the money, but they weren’t and have not been able to do so. The work of Antoine Béchamp may offer an explanation. Using high-magnification microscopes, Béchamp was able to see bacteria and other material coming out from cells (endogenous), rather than entering them (exogenous).

Furthermore, he suggested that illness is the body’s way of ridding itself of toxins and is the result of a weakened immune system. His findings were largely ignored or suppressed by the mainstream but other scientists have since picked up where he left off.

Béchamp was a lifelong rival of Louis Pasteur. It was Béchamp who brought the process of fermentation to understanding but his ideas were stolen. The French Academy of Sciences accused Pasteur of plagiarizing and suppressing Béchamp’s work.

As a result of his activities, Pasteur enjoyed greater commercial recognition and he was credited with the bacterial discoveries that catalyzed medical advancement in the late 1800s. He was instrumental in bringing Germ Theory to the front lines of modern healthcare. Microbes and pathogens were identified and drugs and vaccines were created to combat them.

The Flexner Report of 1910 (funded and published by the Carnegie Foundation with the intention of promoting medication as treatment) further imposed microbe medicine on the masses and sought to rid the world of ‘quackery’. Medical schools were forced to follow strict rules in terms of what they could teach and if they didn’t comply, they were shut down. Naturopathic practitioners were discredited and pushed out of the system.

Prior to the report, medical schools had a choice about what they could teach and even taught naturopathic methods. Afterwards, there was no choice. It was the Flexner rules or nothing. The new way was one of research laboratories and drugs. Industrial giants funded studies and medical schools became affiliated with universities.

Of course, excellence in science is not the same as excellence in care. Pharmaceutical success is judged by profits, not by the amount of people it has helped or cured.

During the current pandemic we’ve heard of those with existing conditions not faring so well. Some people have had mild symptoms; some have been in bed for a while, and others have truly suffered. Why is this? If Germ Theory were 100% correct, then surely we would all have the same response.

Germ Theory does not account for or explain many diseases, such as cancer, heart disease, diabetes, and degenerative and chronic conditions. There is clearly a gap in the conventional wisdom of how our bodies work and why we become ill.

What has been described as a viral epidemic is in this writer’s opinion a complex interplay of electromagnetic forces on food additive E171 or titanium dioxide. There has been an absolute abuse of science and language in describing titanium dioxide as a food additive, which has allowed food and pharmaceutical manufacturers to include this synergistic poison in their products. There is ample evidence of this corruption, in scientific and medical papers, where disease after disease has its origins in exposure to titanium dioxide.

But, despite my attempts for eight years to alert the media, politicians and doctors to this fact, the response to this information has been dismal. It appears many groups have lost the ability to think critically for themselves and more importantly care less about its effects on people. Titanium dioxide is not a nutrient. It is insoluble and excoriates vascular systems within the body. It bioaccumulates in organs, reducing their ability to function properly and it reacts to various frequencies of electromagnetic radiation.

Titanium dioxide is in fact a weapon, for it has many applications in weapon systems including Nanothermite and depleted munitions. Recent forensic research has revealed that the genuine victims of covid-19 have died from a process called disseminated-intravascularcoagulation (DIC).

It is a process from which the body is overcome by a cascade of micro thrombi or blood clots. There is research showing that this process can be used in a positive sense to reduce haemorrhages. Where titanium dioxide and ultrasound can be used to effect limited coagulation thus prevent bleeding in accident victims.

But not understood, by a great many researchers, is the fact that the cause of covid-19 and its many variants such as ‘long covid’ is this complex interplay of elements. Many victims of covid-19 have been predisposed to having their immunity status critically lowered by prolonged exposure to Electromagnetic Frequencies (EMF) from photo voltaics (cheap solar panels) which produce adverse electrical fields.

This has been the case of many victims in nursing homes in Australia and many of those who sailed away on ‘floating microwave ovens,’ the cruise ships where passengers were subjected to high levels of 5G.

The resulting confusion created by the media and politicians, where victims suffering with pre-existing co-morbidities, is easily understood when all the elements of the puzzle are put together in the right sequence. We should bear in mind that the co-morbidities in question are the result of prolonged exposure to titanium dioxide, either from food or pharmaceutical products.
——–
This was sent to me by Robin D P Watson is the author of the Nano Blenders Thesis. https://bit.ly/nano-blenders Disability By Design: Covid-19, Titanium Dioxide and Electromagnetic Radiation by ROBIN D P WATSON