The upward trend in mortality and morbidity resulting from the Covid-19 vaccination program is overwhelming.

The mRNA “experimental” vaccine was launched in mid to late December 2020. In many countries, there was a significant and immediate shift in mortality following the introduction of the Covid-19 vaccine.

Despite all the lies and distortions, the official figures of covid vaccine deaths for the EU, US and UK cannot be refuted.  (see below).

Our Children and Adolescents are Dying Worldwide

This is happening all over the World.

Children and adolescents are dying. 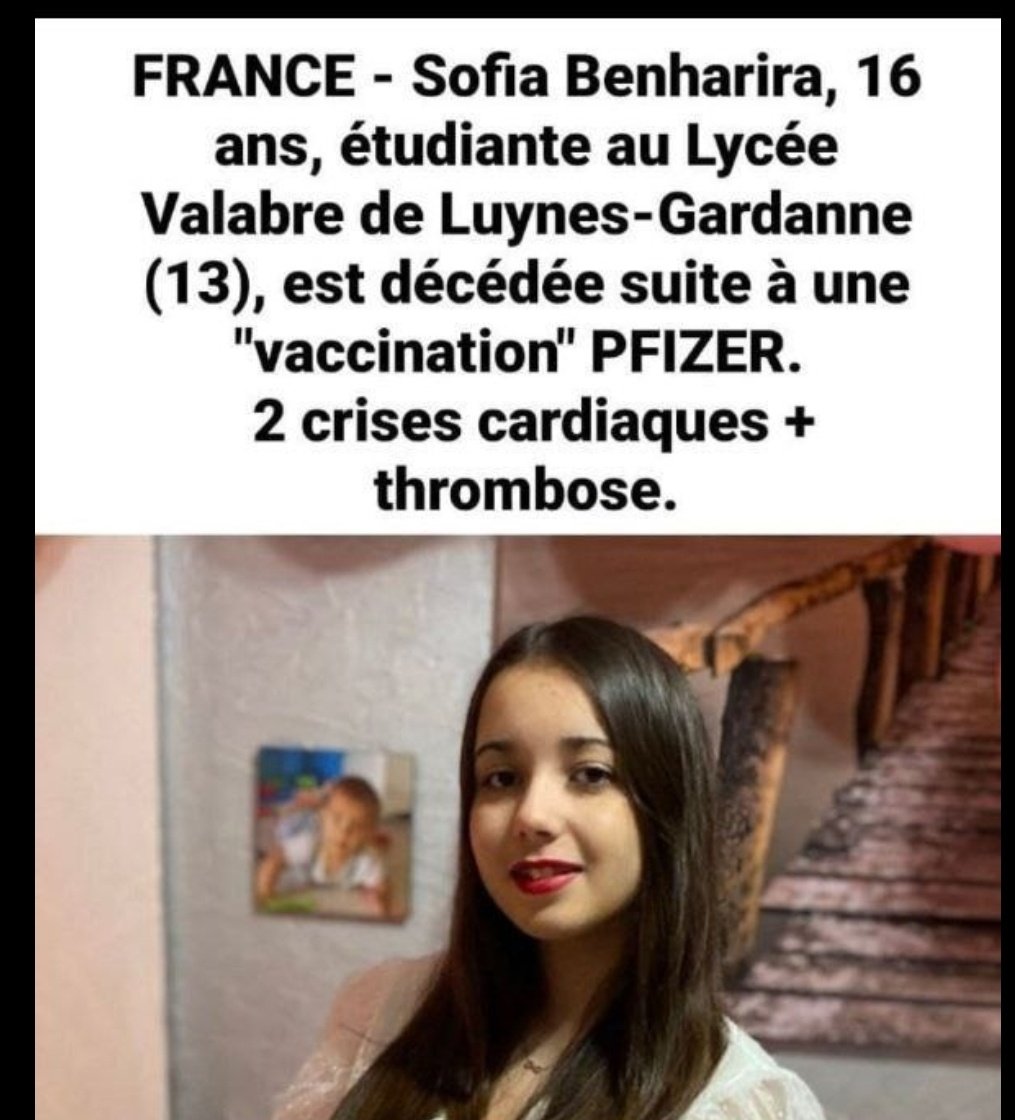 Either the media fails to report vaccine related deaths or it states (with authority) that the deaths are attributable to Covid-19.

Pfizer Has A Criminal Record

And did you know that Pfizer has a criminal record with the US Department of Justice.

The “vaccine poison” imposed at the level of the entire planet is produced by a pharmaceutical company which was indicted by the US Department of Justice (2009) on charges of “fraudulent marketing”.

“Fraudulent marketing” of an illegal and experimental “vaccine” is an understatement.

What is happening today is the outright “Criminalization of the state apparatus” whereby politicians, members of parliament, senior government officials are routinely bribed, coopted or threatened to abide by a diabolical project which is literally destroying people’s lives Worldwide.

Pfizer is killing our children. And our governments are being bribed by Big Pharma.

GAVI COVAX and the Role of the Gates Foundation

GAVI COVAX funded by the Gates foundation is the entity responsible for the Worldwide procurement and delivery of Covid-19 vaccine doses. In liaison with the WHO, the agenda is to fully vaccinate (several doses) more than 7 billion people.

In Europe and North America, the official figures suggest that a large percentage of the population have already been fully vaccinated, with Canada, Spain, Israel, Belgium, Uruguay, Chile and China in the lead (See Map below) 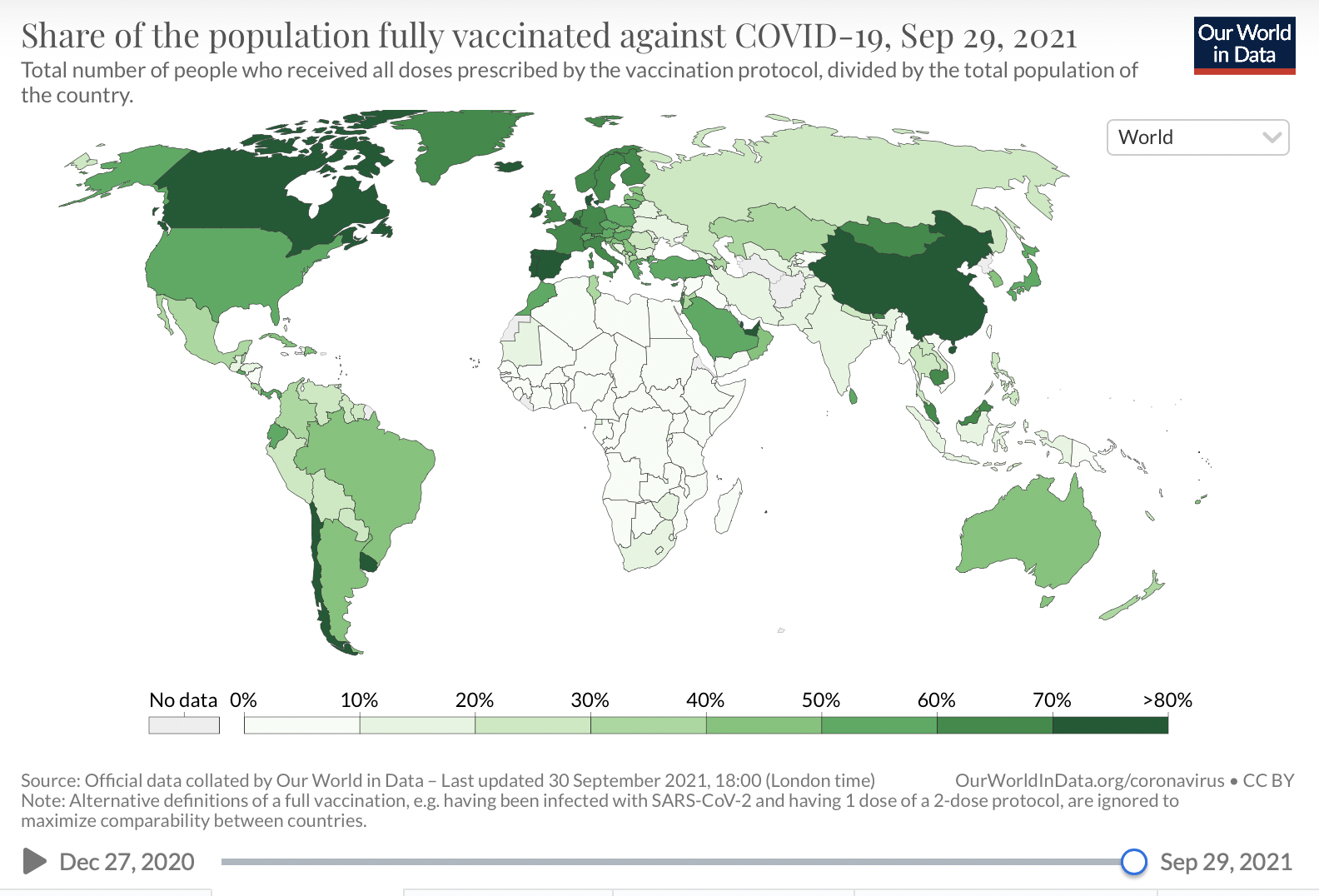 Are these figures reliable? One suspects that they may have been manipulated by Western governments, with a view to sustaining the propaganda campaign and dispelling the deaths and injuries incurred by the vaccinated. Moreover, vaccine related deaths and injuries are now routinely assigned to Covid-19 as the principal cause.

In several regions of the World, the imposition of the vaccine is facing fierce opposition. In India, this opposition pertains to Public Health Foundation India (PHFI), a so-called “public private partnership” set up under the government of Prime Minister Manmohan Singh in 2006, which “received millions of dollars of funding from pharmaceutical companies, vaccine manufacturers, & dubious philanthropic organizations” including  the Bill & Melinda Gates Foundation, the Rockefeller Foundation, the Wellcome Trust, among others.

In India’s state of Uttar Pradesh with a population of half the size of that of the European Union, the vaccine program is essentially defunct.

Western Governments, the Billionaires and Big Pharma to the “Rescue of the Poor Countries”

And now in a twisted logic, the foreign aid budgets of the “Rich Countries” are being diverted to fund the delivery of about  1.8 billion doses of the deadly vaccine to the developing countries. (see Graph 1).

The developed countries are using their “Official Development Assistance” (ODA) budgets to help Third World Countries acquire the vaccine, which is slated to be applied to an impoverished population.

The Graph Below (Our World in Data) indicates the number of doses of the “vaccine” which are generously being donated as part of  the U.S. and EU Aid Programs to Developing Countries.

The Biden administration has promised to deliver 570.4 million doses of which 81.4 million have already been donated and scheduled for delivery.

Other Western countries (several of which are former colonial powers) as well as Japan (member States of the OECD) have also made commitments to deliver some 826, 395 million doses to Third World countries (See Graph below).

ODA “bilateral aid” by the rich countries is a relic of the colonial period. According to the Brookings Institute, “Rich countries have a moral obligation to help poor countries get vaccines”.

What is this moral obligation?

“Foreign Aid” goes into the pockets of Big Pharma and the billionaires, while spreading death and destruction in the poor countries.

What we are talking about is a “donation” in excess of 1.8 billion doses of this poisonous substance, the inevitable result of which will be to precipitate the Third World into the Abysm. 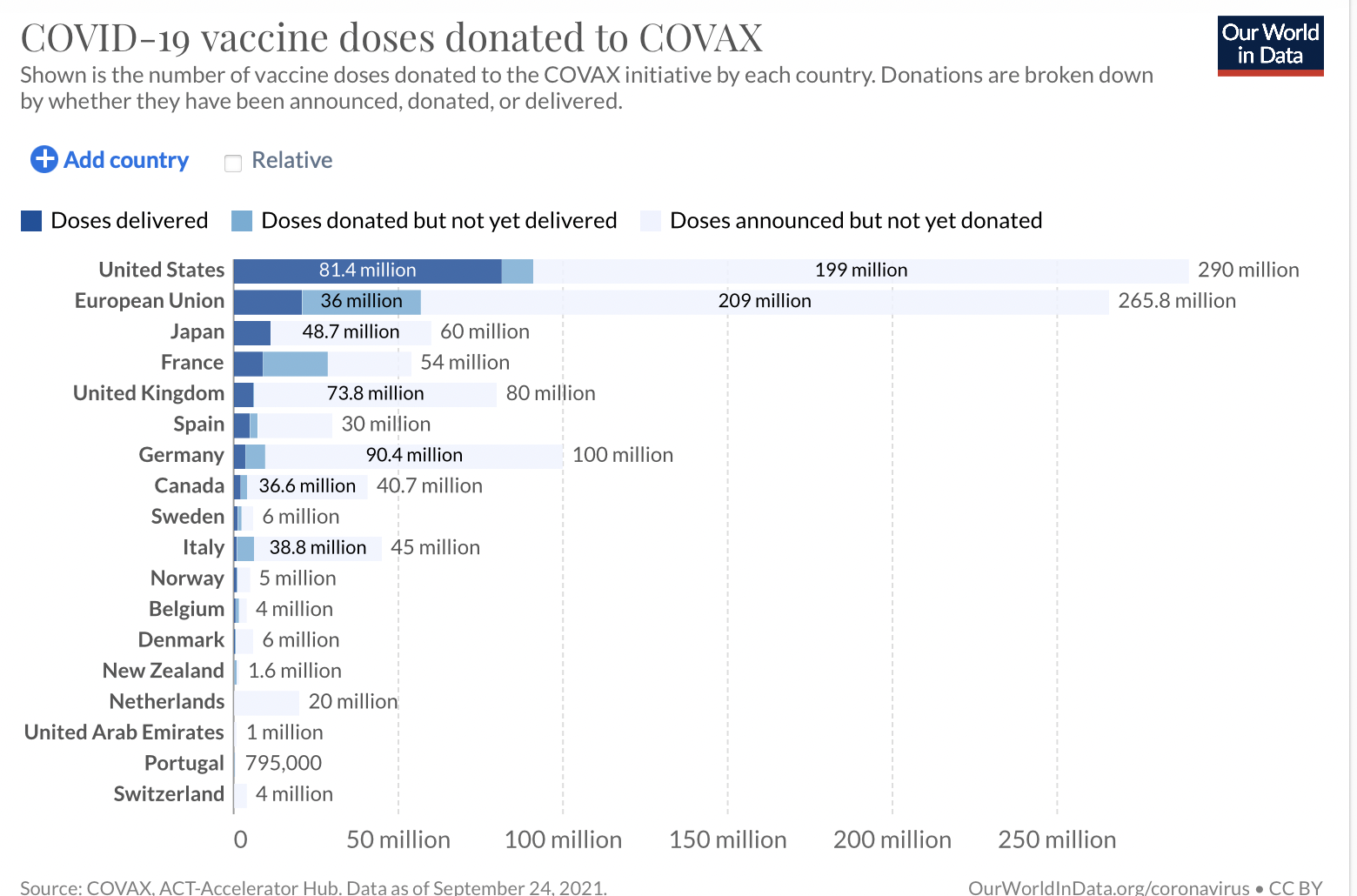 Where are the target countries

The largest share of non-vaccinated population is in Africa, India, parts of the Middle East and parts of South East Asia as well as a few countries in Eastern Europe and the Balkans. (See Map above, dated September 29, 2021)

What is the mechanism pertaining to the purchase and delivery of more about 1.8 billion doses of the Covid-19 “vaccine” to the Third World?

The global supply chain as well as the flow of money payments is complex.  The donations by the rich countries take the form of a “purchase” implemented via GAVI-COVAX which is responsible for the procurement (from Big Pharma) as well the delivery to the recipient developing countries.

What this means is that the funds allocated to “official development assistance’ (ODA) by the Rich Countries which historically have been tagged as a means to finance poverty alleviation and social programs in the Third World have now been redirected to fund the purchase of about 1.8 billion doses of the deadly Covid vaccine, for delivery to poor countries which cannot afford to buy it.

“we must bridge the gap between rich and poor, within and among countries”.

”Development Aid” Now Takes the form of 1.8 billion doses of a “poisonous substance”. The stated objective for GAVI COVAX AMC is:

“to procure vaccines and assist in delivery for LICs and LMICs [low income and low to medium income developing countries]”, i.e almost half of the World’s population. (See The Gavi Covax AMC)

Where does the money go?

The Gates Foundation (GF) as the main founding partner of GAVI plays a strategic role in the multibillion Worldwide distribution of the Covid-19 vaccine through an entity entitled GAVI COVAX AMC.

Since its inception in 2000, the GF has funnelled $4.1 billion into GAVI. At the 2020 Global Vaccine Summit, Bill Gates:

“… announced USD 1.6 billion for Gavi’s next 2021-2025 strategic period. In addition to this funding, the Foundation pledged USD 150 million in support of Gavi’s COVAX AMC to ensure equitable access to vaccines for AMC-eligible economies.”

From the “Rich countries” the “aid money” intended to assist developing countries is first channelled and deposited in the Gates sponsored GAVI COVAX AMC Facility which acts as an intermediary.

The money is then channelled towards Big Pharma (including Pfizer) via GAVI-COVAX (which exacts commissions and retainers), i.e. the aid money goes into both the pockets of Big Pharma and the Gates Foundation including its various affiliates, not to mention the politicians who are bribed into acceptance and submission.

What is the magnitude of this so-called Aid Program

Add up the Figures: The cost of 1. 85795 billion doses of the killer vaccine disguised as “bilateral aid” is of the order of $46,45 billion. This money (“equitably” distributed) goes into the pockets of Big Pharma, the billionaire foundations, with generous bribes and money handouts for politicians and corrupt scientists.

It’s diabolical: upheld as a humanitarian endeavor on the part of Western governments, the delivery of hundreds of millions of doses of the ‘killer vaccine” via GAVI’s COVAX AMC spells a new wave of vaccine related mortality and morbidity directed against the Third World.

This project is coupled with the deadly impacts of the (partial) closure of national economies of developing countries coupled with engineered social chaos initiated in March 2020 which has already resulted in wave of extreme poverty, famine and despair throughout the Third World.

It’s Genocide Conducted at the level of the Entire Planet.

Michel Chossudovsky is an award-winning author, Professor of Economics (emeritus) at the University of Ottawa, Founder and Director of the Centre for Research on Globalization (CRG), Montreal, Editor of Global Research.

He has undertaken field research in Latin America, Asia, the Middle East, sub-Saharan Africa and the Pacific and has written extensively on the economies of developing countries with a focus on poverty and social inequality. He has also undertaken research in Health Economics (UN Economic Commission for Latin America and the Caribbean (ECLAC),  UNFPA, CIDA, WHO, Government of Venezuela, John Hopkins International Journal of Health Services (1979, 1983)

He is a contributor to the Encyclopaedia Britannica.  His writings have been published in more than twenty languages. In 2014, he was awarded the Gold Medal for Merit of the Republic of Serbia for his writings on NATO’s war of aggression against Yugoslavia. He can be reached at crgeditor@yahoo.com