መፍትሕ ሕይወት፣ The ANKH is the key of Life in ancient Egypt. 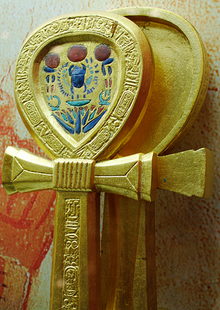 Ra (Re) was the primary name of the sun god of Ancient Egypt. He was often considered to be the King of the Gods and thus the patron of the PHARAOH and one of the central gods of the Egyptian pantheon. He was also described as the creator of everything. Ra was so powerful and popular and his worship was so enduring that some modern commentators have argued that the Egyptian religion was in fact a form of veiled monotheism with Ra as the one god. This seems to be some what of an overstatement, but underlines his primary position within religious texts through out Egyptian history.

Associations with other gods

Ra was often described as the father of the gods. He was sometimes thought to be married to Hesat or Hathoralthough the latter is usually referred to as his daughter. As his worship was pre-dated by that of some of his “children” (such as Hathor and Horus) it seems likely that he took on this role when he was associated with the creator god Atum.

According to the Pyramid Texts, Ra (as Atum) emerged from the waters of Nun as a benben stone (an obelisk-like pillar). He then spat forth Shu (air) and Tefnut(moisture), and Tefnut in turn gave birth to Geb (earth) and Nut (sky). Ra tried to separate Geb and Nut by placing Shu between them and decreed that Nut could not give birth on any day of the calendar. However, Thoth won an extra five days from the moon so that Nut could give birth to Osiris, Set, Isis, Nephthys and Horus the Elder. Amun ብቋንቋ ትግሪኛ ኣሜን (ብቋንቋ ግሪኅ ከኣ Amen) ይብሃል was given the title “King of the Gods” of Upper Egypt. Amon Ra is the power that lies within the DNA and minds of each one of us.The Gnostic God of Amon Ra was worshiped in the capital of the Brotherhood in Egypt at the City of the Ark, or the City of the Brain located in Thebes (Theba). The Brotherhood of Amon Ra were both Gnostic Warriors, priests and or Pharaoh Kings such as Seti I, Ramesses II, Ramesses III, and the Ptolemaic dynasty;  Alexander the Great, and Augustus Caesar were also initiates. I discussed these facts in my last article titled, The First Gnostics: Brotherhood of Amon Ra. Source: Left Hand. The king is standing, “Offering wine to Amen, that he may give the gift of life.” Above is ” The Good God, Lord of the two lands, Neb-maatra: son of Ra, lord of the diadems, Amenhotep prince of Thebes; Image of Ra in the two lands, elected by himself, beloved of Amen, gifted with life.” Over Amen is ” I have given to thee all health which is in me; I have given to thee all vigour which is in me, Amen-Ra, prince of Thebes.”

power and influence of the Brotherhood of Amon Ra, this secret society had spread its teachings and initiates who had reverenced the God as “the hidden wisdom” to the Greeks, Romans, Chaldeans, Phoenicians, Druids, Mexicans, and to many ancient peoples around the world. This same Brotherhood were not only the founders of what I would like to coin the term as “organized gnosticism,” they were also the founders of almost all modern religions such as Judaism and Christianity.

Amon becomes “Amen” in the Abrahamic religions. In Hebrew, the word “amen” means “to support, to be loyal, to be certain, and to place faith in” or more commonly as “truly”. In English and Christianity, the word “amen” is used to affirm or to praise the Lord and also as a name for the Lord. You will find the word ‘amen” 22 times in the Old Testament and much more in the New Testament with 129 occurrences. The writers of the New Testament such as Saint John, appear to have much more of a Gnostic influence than that of their predecessors. The facts are that Christianity is a Gnostic Religion in itself with the historical story and teachings of these ancient Gnostics concealed in allegory from the profane or non-initiated.