It Is a story worth retelling. Few realize that just over a century ago, the Christian nations of the world were at war.

Catholic, Protestant, Orthodox, and Coptic Christians had taken up arms against one another. They had set aside the teachings of Jesus where he said to “love your enemy” and now were engaged in a calamitous war. 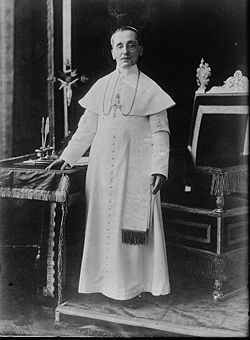 By Christmas, it was evident that this ‘quick war’ was not soon to be over as the politicians had promised. Pope Benedict  XV, left, had proposed a Christmas cease, but it was rejected as ‘impossible’ by both sides.

Alfred Anderson of the British Expeditionary Force was just 18 years old and was at the front on Christmas Eve 1914, when the unthinkable happened. German and British soldiers began to sing Christmas carols while hunkered down in their respective trenches. Soon a truce between the combatants was established, and men who were enemies a few hours before began to greet one another and exchange gifts.

In other areas along the front, German troops set up small trees on the parapet of their trenches, decorated them with lit candles, and began singing carols.  Soon many British troops along the front in this area began to sing along.  British and French troops began to see Germans posting signs saying, “YOU NO FIGHT; WE NO FIGHT.”

Some British units improvised ‘MERRY CHRISTMAS’ banners and waited for a response.  In a short period of time, what the governments of the combatants could not do, pockets of German, French, and British troops arranged a spontaneous truce, and soldiers left their trenches. 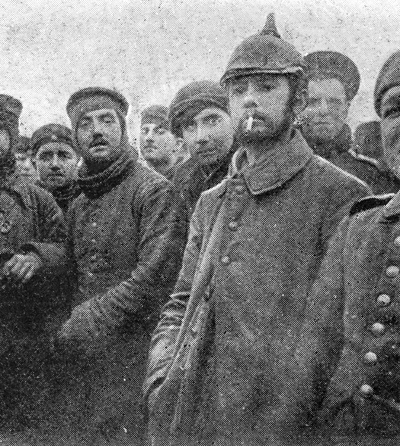 (British and German soldiers standing together)

Up and down the line, men who hours earlier had sought to kill the other, met in ‘no-man’s land’ to shake hands, share rations, chocolate cake, cognac, postcards, newspapers, tobacco, and (more solemnly) bury their dead.

Kurt Zehmisch, another BEF eyewitness recorded in his diary: “The English brought a soccer ball from the trenches, and pretty soon a lively game ensued.  How marvelously wonderful, yet how strange it was; Christmas, the celebration of Love, managing to bring mortal enemies together as friends for a time.”

This informal truce, which also included some French and Belgian troops, was largely over by New Year’s Day. German and British soldiers reluctantly parted, in the words of Pvt. Percy Jones of the Westminster Brigade, “with much hand-shaking and mutual goodwill.”

On January 1, 1915, the London Times published a letter from a Medical Corps Major reporting that in his sector, the British played a game against the Germans and were beaten 3-2.  Men had exchanged gifts and buttons.  Soldiers who had been barbers gave free haircuts.  One German, a juggler, gave an impromptu performance of his routine in the center of ‘no-man’s land.’

German and Allied commanders tried to cover up the impromptu ceasefire.  French generals could not fathom why their soldiers disobeyed orders and joined the forbidden Christmas truce.  To the consternation of field commanders on both sides, some of the troops were reluctant to return to fighting.  In several areas, men were ordered to restart the hostilities under penalty of court martial.

In Germany, it was not given wide publicity, and quietly the High Command replaced most front-line units that took part in the ceasefire. Though caught off guard and embarrassed by the spontaneous truce, allied commanders made sure that there would be no repeat of the 1914 Christmas truce, and during subsequent Christmases had their troops engaging the enemy during the holiday.

The Christmas Truce of 1914 demonstrates how the common belief of a Savior born in Bethlehem shared between enemies can make even the bitterest of enemies friends.

When the British heard the Germans sing a song about a little baby born in a stable, they joined in singing “Silent Night.”

It is astonishing how a song about a little newborn baby could move enemies to put down their weapons and embrace one another as friends.

When those on both sides of the trenches realized that the Christ they knew was also the Christ their adversary knew, what other response could there have been but to establish peace among brothers?

That is why this story is worth telling every Christmas. Christ came to bring peace and forgiveness of sins to a troubled world.  The knowledge of Christ still brings liberty and peace to all who encounter Him.

The Christmas Truce of 1914 is a glowing testimony to the words spoken by an angel on that first Christmas so many years ago, “Peace on Earth, Good will toward all.”  Merry Christmas to all!

A few years ago a Dr Thomas Weber researched war diaries and period documents to reconstruct the 1914 Christmas Truce.

He found evidence that the a lot of soldiers attempted to initiate repeat truces in 1915 and 1916, but by then the division commanders on both sides had orders to use snipers to shoot any soldiers seen coming out of their trenches unarmed.

It actually was the singing of mutually familiar Christmas songs that prompted the soldiers to approach each other without their weapons. During modern battles soldiers were driven by adrenaline fuelled brutality, which turned to remorse at rest in the trenches between battles. The break from the sheer inhumanity of what they doing, probably kept a lot of them from losing their humanity forever. The sad fact is that most of the ones that participated in the 1914 truce didn’t survive the war.

Another one that didn’t approve of the truce along with the division commanders and the French was regimental headquarters front line courier corporal Hitler. At least, that’s what one of Hitler’s brigade, Heinrich Lugauer, recorded in his war diary.
Weber quoted him; “When everyone was talking about the Christmas 1914 fraternization with the Englishmen, Hitler revealed himself to be its bitter opponent. He said, ‘Something like this should not even be up for discussion during wartime.”